This story first appeared in the Information Point newsletter Our World in 2010, when Frank Gadd from South Africa told us about attending the World Cup.

As the local slogan says, ‘Feel it, it is here!’ and feel it we did. Ever since the euphoric day in May 2004 when Sepp Blatter opened that white envelope to reveal that South Africa had won the right to host the 2010 World Cup Soccer tournament, we have been feeling it, in every possible way.

At first, everyone thought only of riches beyond compare. Hotels and bed and breakfast establishments were changing hands at almost any price. Advance bookings were being secured at astronomical prices. The government started issuing tenders to rebuild and re-vamp the entire country it seemed. Almost immediately there were traffic jams as the local authorities started building, widening and resurfacing roads. Grand plans were announced to build brand new super-stadia in every host city. Multi billion USD plans were announced to build the first Metro rail in South Africa, with trains traveling at up to 160 km per hour, cutting traveling time between the Johannesburg airport and city centre from hours to 20 minutes at most. The country was at an all-time high, nothing could go wrong, ‘Africa can do it!’ as Sepp Blatter said.

I, of course, applied for my tickets as soon as they went on sale in January 2010. Two wheel chair tickets, one for my daughter, Stephanie, who would be my pusher / assistant, and one for me. The tickets were for the Brazil vs Portugal game, two of the top teams in the world and expected to be a real cracker. Brazil was, at that stage, ‘odds on’ favourites to win the world cup for the fifth time.

FIFA had been roundly accused by all and sundry of over charging for World Cup tickets, but on collecting the ticket in May 2010, I was pleasantly surprised to find that my assistant was allowed in free. Great, now I had four tickets instead of just two and could invite a friend. An additional bonus was that I was allocated free parking in the basement of the stadium, instead of having to use the public transport system set up for the World Cup.

On the big day, my son Paul who had unexpectedly come out from the UK for a short visit, Stephanie, a friend Ruon, and I got into my car and headed for the newly built Moses Mabida stadium in Durban. Security is of course of paramount importance to FIFA so the security check point was our first port of call. This experience was almost more exciting than the actual game. Firstly the walkers, Stephanie and Paul, were taken to a tent and frisked for illegal objects, knives, guns, bombs etc. Us wheelies, Ruon and I, just stayed in the car. The car was then driven over a scale where it was weighed and parked in a tent where it was x-rayed. A sniffer dog, a lovely light-brown labrador then sniffed around the car twice. The dog found nothing so we proceeded onto a ramp where the under side of the car was searched using mirrors attached to long poles. I had inadvertently left my bowls in the car, they were removed and again x-rayed and returned. The inside of the car was then searched by a police officer.

Having passed all of the tests we were allowed to proceed towards the gate where we were told to wait for our police escort to arrive. Some fifteen minutes later we were on our way, a police motor cycle in front with siren blaring, four or five cars behind us, followed by another four or five police on motor cycles. I felt like the President of the country, Jacob Zuma, on his way to the opening of parliament. Five minutes later we entered the stadium via a back road and were shown to our parking space right near the lift. We got into the lift, pressed level five and were deposited close to our allocated seats. The position was great. We were seated right on the edge of the balcony in front of the press boxes and executive suites almost opposite the goal posts on the north side of the field. Nothing obstructed our view and there was no one behind us to deafen us with their vuvuzelas.

The stadium was brand new, all white, light and airy and the atmosphere was electrifying; it was packed to capacity with over sixty-two thousand screaming, singing, dancing fans from all over the world. Large contingents of Brazilian and Portuguese fans were very much in evidence, prominently displaying their scarves, hats and soccer jerseys emblazoned with their countries’ colours. At one stage an enormous ‘t-shirt’ that stretched over a large block of seats was unfurled. A spectacular sight. The ubiquitous vuvuzelas were also very much in evidence, but to my surprise were not too noisy in the stadium.

Then, after the national anthems were sung, the game was on; but it was a disappointment. Both sides had already qualified for the final sixteen and were, it seems, saving their strength for the knock out stage. After ninety minutes of play the game fizzled out to a tame draw. Ah well, the experience was well worth the effort and we all had a great day’s entertainment. 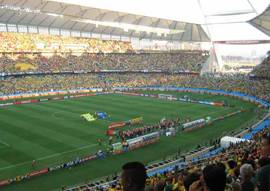 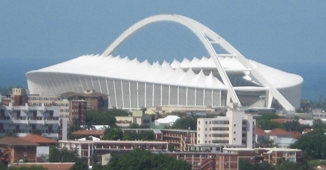