This story first appeared in the Information Point newsletter Our World in 2010, when Luke Herron Davis told us about his book, ‘Through a Child’s Eyes’, a journey through the short life of his son, Jordan Christopher Davis. Jordan was born on 5 April 2007 and died on 23 November 2008. He had x-linked myotubular myopathy.

The book of twenty-six poems and one short story are all told from Jordan’s perspective, about the events in his life from birth to when he died to beyond and are aimed at bringing hope to those who worry, courage to those who fear and grace to those who struggle. The main purpose of the book however is for people to see a sweet little boy who lived with passion and courage throughout his short life.

It was in May 2010 that I was inspired to put Jordan’s life to poetry. Our daughter Lindsay participated in a poetry reading with her second grade class one day, and I began to think ‘What if Jordan’s life was told this way? And what if he was the storyteller, the poet?’ I began plotting out several memorable events of his life. Obviously, some major ones were his birth, his first and only birthday, Christmas, sitting up, illnesses, and of course, his death. And there were moments such as his first haircut, playtime, and drinking from a straw for the first time.

One or two of the poems are especially meaningful. ‘Mommy’ reflects on the late summer of 2007, when I was with our son Joshua after he had surgery, and my wife Christy was able to spend some quality time with Jordan away from the hardship of the children’s hospital in Miami. It brings to mind a quiet, refreshing time for the two of them in the midst of life’s chaos. And ‘Jesus,’ which tells the story of Jordan’s death, tells the story as if Jordan is going from one dream into another. It was very difficult for me to write that poem, mainly because I didn’t want it to end. It felt like I was losing Jordan all over again. But the longer the poem went on, the more peaceful and enchanted Jordan became, and I arrived at a level of peace that I hadn’t had before.

This is my first public foray into writing. I had written a 300 page book for Christy for our most recent wedding anniversary. That, however, was about our life together as a couple and was for her only. We have no idea how far and wide Jordan’s story will spread, but we want to try and give as many people as much comfort, hope, and inspiration as possible because of how little Jordan lived. I’m a firm believer that we can give others inner strength by honoring those like Jordan.

The book has been printed at a local printer in St. Louis, not in a traditional publishing house and all profits from sales will go to the Joshua Frase Foundation. The cost of ‘Through a Child’s Eyes’ is $10 USD. To order a copy or to discuss international rates, please contact me via email at LCDavis4@att.net or LDavis@wcastl.org. 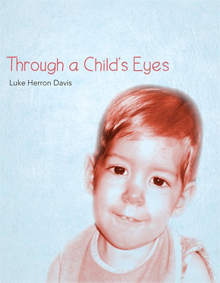 One thought on “Through a child’s eyes”