This past January Cindy Mironovich and Jill Hadley from Ridgewood, New Jersey climbed Mount Kilimanjaro to raise funds for the Joshua Frase Foundation. Inspired by Adam Foye who suffers with muscle weakness and fatigue as a result of centronuclear myopathy, they decided to use their muscles to climb the 19,340 ft mountain to make a difference and support the US charity that promotes research finding a treatment for muscle diseases and supports families like Adam’s.

Cindy got the idea to do the climb almost four years ago when she attended a birthday party for her friend. His wife, Foy Cooley, who was 65 at the time, was sharing her experience of summiting Mount Kilimanjaro. Cindy says ‘I was so impressed. I’m embarrassed to say but I thought, heck, Foy is 65 and did this! Could I?’

After watching documentaries about Kilimanjaro years before she was intrigued by hiking through 5 different climate zones and finding a glacier at the top – a glacier that’s receding so quickly that they expect it to disappear in the next 5 – 8 years!’ Mount Kilimanjaro was beckoning her. Cindy asked her friend, Jill if she’d be interested in this adventure. Jill never hesitated once and said ‘yes’.

Starting the ten day trek Cindy said ‘I was aware of this fear rising up in me’. Wondering if they’d be able to handle the extreme temperatures (cold single digit numbers), the winds of over 60 mph, the altitude, the fatigue (6-12 hour hikes) and no showers, Cindy says ‘I realised this would take courage on my part to push through the fears. A ‘courage’ that had nothing to do with being fearless. But instead more acknowledging the fear and choosing to still act in the face of it’.

‘I thought often of Adam and the fatigue he faces day in and day out due to his centronuclear myopathy, the rare genetic disease or orphan disease, that he was born with. I learned that Pharmaceutical companies show little interest in curing orphan diseases such as Adam’s. His mom, Sarah, is out to cause a cure for this disease. She’s out inspiring moms and dads, international organisations and medical researchers to create this cure. Everyday Sarah emulates courage and grace not knowing what the day will hold for her and her son. It’s not just ten days for Sarah or Adam, it’s a life time’.

Cindy and Jill reached the summit of Mount Kilimanjaro on 24 January, it was only 6 degrees on a day day started at 4 am straight up a 900 feet ridge of snow and ice. They could barely breathe. Cindy wrote ‘I don’t think either of us has ever done anything so difficult in our entire lives. While we were climbing there were so many moments we were completely exhausted and was filled with the fear of failure’. Now they are home they are grateful for the experience. Their climb raised a grand total of $3,749. 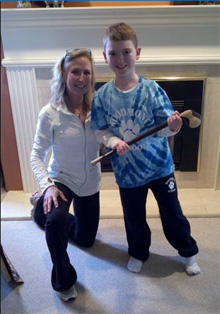