This story first appeared in the Information Point newsletter Our World in 2012 when Wayne Fitzgerald told us about running the Dublin marathon for his friends Marie and John, to raise funds for The Myotubular Trust.

Marie and John Loughlin live in Galway, Ireland and have lost four sons to Myotubular Myopathy. Earlier this year their friend Wayne Fitzgerald decided to run the Dublin Marathon to raise funds for the Myotubular Trust. Below Wayne writes about training and what it meant to take part in the event.

Training for this marathon began some time back, when the idea of completing it was planted in my head by a friend who also wanted to run it but decided prior to our planned start date against the idea. I on the other hand felt as I had asked a friend to design a running programme for me, that I would continue with the plan.

As a member of the Irish Defence Forces I have always kept a certain level of fitness. Prior to training for the marathon I tried to complete three weight training sessions and two to three runs a week. Once the marathon training kicked in on July 4th I stopped training with weights and concentrated almost solely on running. The very rare time I did a weights session it was to complement my running by concentrating on leg muscles exercises with light weights.

My first run on July 4th was a four mile run leading up to eight miles on the first Sunday of a sixteen week programme. Each week was different with regards to distance and types of run. These varied from three miles ‘Hard’, to hill sessions, interval training, fartlek and of course endurance runs with the shortest been eight and the longest pre marathon run of twenty two miles. During these runs I would rehearse my eating and drinking planned for the marathon day. By doing this I learned what foods I could eat without fear of my body rejecting them on the day. It also afforded me an opportunity to gauge at what stage I would suffer most and how to minimise this effect. I found later in the training programme, towards weeks 12 – 16 , that using ice baths and very often the sea is a brilliant form of recovery. After long endurance runs or the end of a tough week, ten minutes in the Atlantic Ocean, while often freezing, aided my recovery substantially. I also had three physiotherapy sessions during the training that ensured I was in perfect shape for the marathon.

The prospect of running for X Linked myotubular myopathy entered my mind long before I approached John and Marie and asked for their permission. I, like many of their friends was aware of the illness and the pain it had caused to them and their families. John and Marie have always been very open about their sons and are willing to speak of the illness. The fear for me was I was afraid of upsetting them or opening old wounds. Then one day at work, a friend asked me was I running the marathon for any group. I replied no and he said ‘why don’t you run it for Locky’s boys’. So I went to John (aka Locky) and asked him was it ok for me to do it. John of course being the type of man he is, answered absolutely.

With John and Marie on board, the training, despite entering a tough phase now had a real purpose, something greater than running a marathon. We as one, were going to spread awareness of this illness. Plus for me, when the endurance runs got tough, I had added motivation to complete them.

As part of our plan, we raised sponsorship for X Linked myotubular myopathy but the greatest result we got from this was people asking ‘what’s that’. The run provided us with a platform to educate people and spread awareness of this illness. It was an opportunity to spread word of websites, contact groups and other people who had been through this and could offer support to people in the event it occurred in their home.

After 16 weeks of training, the day of the marathon had finally arrived. Standing at the start line waiting to go, a number of emotions ran through me. I was partly relieved to be standing there, proud to be running for the little men watching over me, nervous about the challenge ahead and apprehensive about the run.

My wife Lisa, who supported me all the way through the training, putting up with me coming in the door from work just to change into running gear and go back out the door, leaving training gear dotted round the house and my general absence, had traveled to Dublin with my girls Alayna and Emma to support me. I thought about them a lot on the start line and how lucky I am to have them and how grateful I am to them for being a source of motivation.

As the race began I ran at my pace. People have often got caught up in the moment and take off too fast causing severe problems later in the race. I found however by running some shorter races during my training; ignoring all the other runners and running as I had trained, that I felt strong as I passed each mile marker until around 23 or slightly after. By 20 I had hit my wall and began to feel tired. As I passed runners and others passed me, I noticed various groups and charities on the runner singlet’s and tshirts so I thought a lot about X Linked myotubular myopathy and John and Marie’s little boys.

By the time I had reached 25 miles I was really feeling pain and it was around then the race came back into Dublin City. I knew then not only would I finish the marathon but would do so under my planned time, without walking one step and would have helped raise awareness of X Linked myotubular myopathy. I thought of John and Marie’s’ little boys at this point and whispered thanks to them for watching over during the race.

Finishing the marathon while though a nice feeling, was never about me as an individual, it was about continuing through barriers to achieve a goal. Often in life there will be no goal, no end state but somewhere along the line a difference will have been made and that is what we did as a team by running the Dublin City marathon and raising awareness for X Linked myotubular myopathy. 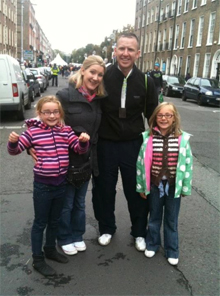