This story originally appeared in our newsletter Our World in 2016 when Zak Hughes wrote about the problems he had experienced with his vision caused by corneal scarring and the operations that led to his improved vision.

Zak Hughes is 20 years old and was born and diagnosed with x-linked myotubular myopathy in the very same year that the MTM1 gene was discovered by Jocelyn Laporte’s team in France. He lives with his family at home in Devon and now has a full team of PAs to enable him and care for him.

Zak started to notice a problem with his vision about a year ago due to corneal scarring caused by years of dry eye issues. He was told by a local ophthalmic surgeon that nothing could be done and he would have to live with poor vision for the rest of his life. Zak did not want to settle for that opinion and decided to seek further advice from specialists at Moorfields Eye Hospital in London who said there are always options and helped him to restore his good sight with some simple surgical treatments and a plan if it reoccurs.

About a year ago, I started to notice a decline in my general eyesight. I started having to sit closer to the TV and my computer screen and increased the font size on my phone.

A visit to the opticians revealed that my eyes, through years of dryness, had developed a layer of scarring that impaired my vision. I was referred to my local eye hospital for an appointment, in which it was confirmed that there was a layer of cloudy scarring obscuring my pupils in both eyes (or medically known bi-lateral chronic exposure keratopathy with secondary subepithelial scarring). I was also told at this appointment that nothing could be done about it, despite asking about laser surgery or a corneal transplant.

Feeling dismayed by this opinion, I wasn’t prepared to accept that my vision would be poor and affect my quality of life for something so simple as a thin layer of scarring. So I researched dry eye specialists and made a private appointment to see a consultant ophthalmic surgeon at Moorfields Eye Hospital in London for a second opinion, knowing that as a leading and globally renowned eye hospital their approach might be more cutting edge.

I was relieved that the consultant at Moorfields was much more positive that my vision would be improved. He suggested to me that a relatively simple procedure to scrape away the scarring could be performed to restore good vision and suggested that with the help of a surgical colleague any future issues with dry eye and further scarring could be reduced or even prevented. This was because I was unable to close my eye completely overnight which was contributing to dry eye. The surgeon suggested it would help to prevent this by correcting my drooping eye (sloping lateral canthus) with surgery on the outside corners of the lids to begin with and if required, further surgery to the inner corners of the eyes. His only concern about surgery to the inner corners of the eyes would be that it would change my cosmetic appearance.

It was agreed that I would have three separate procedures as a first option and further surgery for the inner corners of the eyes would be considered if I still have ongoing dry eye problems. Initially I would have lid surgery performed on both eyes, followed by the scraping (a superficial keratectomy) on each eye separately, with time in between to allow for healing. These would be done approximately 2-3 months apart.

My first procedure was performed in March by a consultant ophthalmic surgeon specialising in lacrimal, orbital, eyelid and socket disease at Moorfields. The surgery involved ‘releasing the lower lid retractors and the lateral canthi elevated with a deep 4.0 Prolene supporting suture placed between the inferolateral tarsus and perineum of the superolateral orbital rim’ – which entails cutting the muscle which pulls the lower eyelids down when you try to open your eyes wider. The bottom lids were then drawn up with a longer stitch attached at one end to each of my lower eye lids and on the other end to their respective eyebrows. These were left in place for a period of about 18 hours to prevent the lower eye lid muscles reattaching themselves again.

The procedure itself took about 40 minutes and was done under a local anaesthetic – due to a previous problems with general anaesthetic I prefer to avoid them if I can. As you can imagine, several injections in and around the eyelids to numb the area made it quite painful at first.

Afterwards my eyes were dressed and covered over with patches to protect the stitches. It wasn’t particularly nice, but listening to a couple of audio books served as a distraction. The next day, after not much sleep and on only paracetamol for pain relief, the pads and then the stitches holding my lower lids up were removed. There was an immediate noticeable difference to the position of my lower lid, and I was discharged home with antibiotic tablets to recover and instructions to use regular eye drops to aid recovery. I recovered really quickly and the pain eased completely once the stitches were taken out. I also took arnica tablets which seemed to help with a faster recovery and post-surgery bruising. The surgeon was really pleased with my recovery a week later.

The second and third procedures, namely the superficial keratectomy to scrape away the scarring were done in first my left eye in April and then my right eye in August, again by a consultant ophthalmic surgeon at Moorfields Hospital. We decided that it should be done first in my worst affected eye – the left eye.

Once again, I elected to have both procedures for my left and right eye done under a local anaesthetic. Each time, all that was required to numb my eye was anaesthetic eye drops. Each of the procedures lasted about 20 minutes and involved clamping the eye open, before soaking the cornea with an agent that burnt away the outer layer of the cornea – known as the epithelium – which stung a little. Then the surgeon proceeded to pick away the layer of scarring that had formed in front of the pupil. It was a bit surreal watching a scalpel near my eye and hearing the picking noise of the scar tissue being removed. After as much scarring as possible could be removed, the eyelid was injected with more local anaesthetic to prepare it for the ‘tarsorrhaphy’ – or in other words stitching the eyelid closed to aid healing of the epithelium. I was advised that the eye would need to remain stitched shut for a period of two weeks to two months depending on how well it healed. I was also given regular steroid drops (dexamethosome), antibiotic drops (moxifloxacin) and was advised to maintain my routine eye lubricant regime, one hourly if possible during the day.

Luckily, two weeks later, I was able to have the tarsorrhaphy removed and after a bit of readjusting to getting my eye back I realised that I was able to see so much better. This was the same for my right eye in August and my vision is now near-perfect with glasses. As a result of the surgery, I am now even more fastidious with my dry-eye care regime and wear protective goggles overnight and have regular eye lubrication in the form of drops (1-2 hourly in the day and thick eye gel at night). My consultants have said that the scarring could return again but there are always options to combat the scarring and I can have the procedures repeated if necessary, which is good news.

Although the procedures were slightly painful at times, I recovered really quickly and it was only a minor inconvenience to have the use of only one eye, while the treated eye took time to heal. I feel it was definitely worth the effort and discomfort that I went through to regain good sight and I will certainly not hesitate to have it all done again if needed. Immediately following the surgeries, I was able to read a book with regular small print for the first time in ages, which was just an amazing feeling. 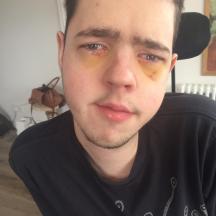 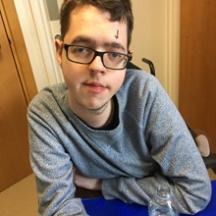 Dry eye can occur for several reasons – either because your eyes do not make enough tears or because your tears evaporate too quickly.

Eye lubricant
Use an eye lubricant regularly in the daytime (1-2 hourly) and at night** (the caregiver will need to wash their hands or wear gloves).

Blink
If you can blink, remind yourself to do so as often as you can.

Baby shampoo
Wash your eyes using a gentle solution of baby shampoo or saline drops. You can also wash out the goggles and eye sponges in the eye eco kit with baby shampoo ‘no more tears’.

Heat pads
Use a heat pad like those from The EyeBag Company regularly, to help promote opening the pores that will give natural ‘lubrication’ to the eye. The Eye Eco Tranquileyes system also offers a beads therapy goggle kit which does the same thing.

Eye redness
Get any eye redness seen to quickly – its usually a sign of dry eye or an infection and needs to be treated quickly.

Don’t be disheartened
If you do get dry eye – there are other options to treat it and prevent scarring.

Important note:
If you are considering surgery it is important to be aware that people with neuromuscular conditions must take great care if they are to have a local or general anaesthetic. Even someone who has a very mild form of a neuromuscular condition or a family history of a condition, needs to let the anaesthetist know well in advance so that tests can be carried out and proper care after the operation can be arranged. Further information is avaiable from the Muscular Dystrophy Campaign.