During 2017 The Information Point reported on a number of research stories and these can be found below.

Characterisation of a new class of congenital myopathies

With the support of funding from the Myotubular Trust, the team of Jocelyn Laporte, have identified a novel gene, named CACNA1S, implicated in centronuclear myopathy. This is a very important breakthrough as it highlights potential new avenues for research.

High-throughput sequencing of the DNA of 11 patients who did not have a genetic diagnosis for their centronuclear myopathy, revealed to researchers that all of the patients had mutations in the CACNA1S gene. Surprisingly, these mutations are widespread in the gene and are either from recessive or dominant transmission.

The gene CACNA1S was already well studied because of its implication in other diseases but this is the first time the gene has been associated with a myopathy and will give hope to families who currently do not have a genetic diagnosis.

Centronuclear myopathy: towards the development of a therapy

After identifying Dynamin 2 as a potential therapeutic target in congenital myopathies, the team of Jocelyn Laporte at the IGBMC has managed to specifically modulate the level of this molecule and to cure almost all signs of disease. These results published on 7 June 2017 in the journal Nature Communications provide excellent perspectives for therapeutic development.

The centronuclear myopathies, which include centronuclear myopathy (CNM) and myotubular myopathy (MTM), are rare genetic diseases characterised by a very disabling muscular weakness and early death. There are several genetic causes of CNM, in particular mutations of genes coding for myotubularin (MTM1) or dynamin2 (DNM2), proteins that regulate the organisation of muscle fibres.

Three years ago, researchers from Jocelyn Laporte’s team demonstrated in myopathic mice lacking MTM1 that decreasing the level of DNM2 by genetic cross improved the clinical signs of the disease (Cowling et al., 2014). Animals that previously died of the myopathy by two months of age, instead survived two years, a normal lifetime for mice. This proof-of-concept published in 2014 identified DNM2 as a new therapeutic target, generating a large interest for therapeutic development. This required however that an injectable compound targeting DNM2 could be developed for clinical use.

Hichem Tasfaout, Belinda Cowling and Jocelyn Laporte at the IGBMC have collaborated with Ionis Pharmaceuticals, a world leader in antisense oligonucleotides (ASO) technology. ASOs are synthetic RNA fragments that can bind very specifically to target messenger RNAs to promote their degradation.

These researchers have demonstrated that injections of ASOs targeting DNM2 messenger RNA in myopathic mice effectively reduced the level of DNM2 and restore muscle function, either to prevent development of the disease (injection before onset of symptoms) or to revert the signs of the myopathy (injections in a severely affected animal). Treatment resulted in improved muscle function and increased lifespan, using a chemistry and dose that can be translated to patients.

These very promising results contributed to the creation of the start-up company Dynacure, which aims to transform this approach into clinical trials. This study was financed by SATT Conectus and the National Research Agency (ANR).

In October 2017 the Myotubular Trust announced its 2017 grant award to Dr James Dowling of Sick Kids Toronto. The grant will allow Dr Dowling and his team to investigate the effectiveness in myotubular myopathy of two existing drugs currently licensed for use in children who have other conditions which have been identified by Dr Dowling’s team as showing encouraging signs of improving the symptoms of myotubular myopathy.

This three year grant from Myotubular Trust and supported by our friends at ZNM – Zusammen Stark! will allow Dr Dowling and his team to investigate the effectiveness of these drugs, either alone or to complement other therapies. Repurposing medicines that are safe and have been used and studied in children is a very exciting goal for rare diseases. We are delighted to be making our 2017 grant of £216,000 to Dr Dowling to pursue this promising project.

“Because these drugs have previously been used in children, we feel that the pathway for clinical development and testing of them can be feasibly accomplished in a timely and cost effective manner” – Dr Dowling.

During the course of this grant, Dr Dowling’s laboratory will also continue to develop on previous awards by the Myotubular Trust. Loss of MTM1 results in the accumulation of a lipid called PI(3)P in someone with myotubular myopathy. This project will continue to develop inhibitors of PI(3)P that work well in humans and can be translated to clinical use.

“Furthermore, we believe these therapeutic strategies may be applicable to the broader range of patients with centronuclear and myotubular myopathy” – Dr Dowling.

To read more about this research see below. 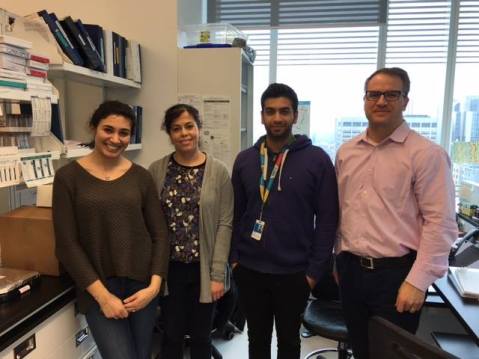