This article about the 219th ENMC workshop on myotubular/centronuclear myopathies first appeared in the Information Point newsletter Our World in 2016.

The purpose of the workshop was to establish an international database of mutations, variations and their clinical presentations, to be able to determine if particular genetic variants of the gene are the cause of disease. The workshop brought together worldwide leaders in the Titin myopathy field, Titin family advocates, as well as representatives from other successfully developed groups. 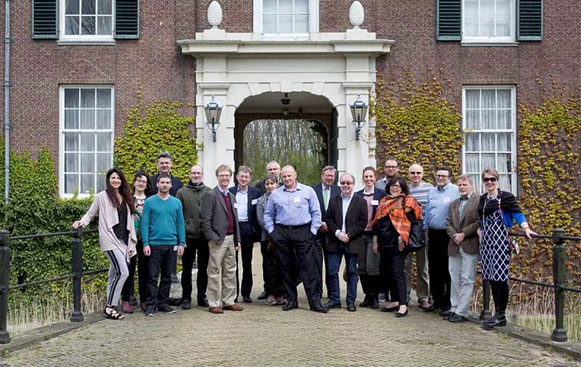 This story first appeared in the Information Point newsletter Our World in 2013, when Sarah Foye, Lindsay Swanson, MS, CGC and Elizabeth Torosian told the The Information Point about the discovery that mutations in the Titin (TTN) gene can cause centronuclear myopathy.

As you may know, the congenital myopathies are a group of inherited disorders (passed down from parent to child) that affect the structure of muscles. The class of myopathies known as centronuclear myopathy (CNM) have historically been named due to the muscle cells appearance under the microscope. The nuclei of muscle cells affected by CNM tend to be found in the center of the cell, unlike in healthy muscles where the nucleus is found on the edge of the cell. These internalized nuclei are what give CNM it’s name, but there are several genes known to cause various forms of CNM. These genes are MTM1, DNM2, RYR1, BIN1 and TTN however some genes still remain unknown.

Using this technology, the Beggs Lab, along with a group of collaborators, discovered that mutations in the Titin (TTN) gene can cause CNM. Titin, the largest known protein in the human body, is coded by the TTN gene. It is a structural protein that acts as a molecular spring within the muscle cell, as seen in the drawing to the right. Although Titin has long been known to be a structural protein within the muscle cell, examination of the gene TTN has been limited due to it’s gigantic size. However, the use of new genetic testing methods like WES and WGS have allowed researchers to understand more about Titin and the TTN gene. You can read more about this in the article below.

Beggs et al, used the new genetic testing methods to screen a group of subjects who were diagnosed with CNM by muscle biopsy but tested negative for mutations in all genes known to cause CNM. Through this process, they identified that TTN mutations were likely the genetic cause in five individuals with CNM. You can read more about this in the article below:

However, there still remains a large category of people diagnosed with CNM whose genetic cause remains unknown. With new gene discoveries and new technologies, it can be expected that people can jump from the ‘unknown’ category into a category with a known gene. New clinical testing can help ease the diagnosis by testing for many genes simultaneously. The University of Chicago Genetic Services Laboratories is now offering a state of the art test in which multiple congenital myopathy genes can all be tested at once. Known as next generation sequence genetic testing. This type of testing is faster and cheaper than prior testing methods. This panel includes the TTN gene. If you or a family member have been diagnosed with MTM or CNM but never had a genetic mutation identified or confirmed through a clinical lab, please consider discussing this with your doctor or a genetic counselor.

One final point to note is that TTN mutations are known to cause a heart problem known as adult onset dilated cardiomyopathy. This can have important clinical implications for people who may have CNM caused by a TTN mutation and may be another important reason to have the genetic testing done. Additionally, any person with heart problems and a congenital myopathy may strongly consider TTN as a possibly cause.

Since 2011 the Myotubular Trust has been funding a grant to Dr Jocelyn Laporte at IGBMC in France to use next generation gene sequencing technology to find some of the other genes that cause myotubular and centronuclear myopathy. Jocelyn Laporte says ‘The team in Strasbourg is supported by Myotubular Trust to identify genes linked to myotubular and centronuclear myopathies using the novel genome sequencing approach. Due to this support the lab were able to participate to an international collaborative study that culminated in the identification of mutations in Titin in patients presenting with centronuclear myopathy. Titin is the largest protein of the human body and acts as a molecular spring during muscle contraction and relaxation. Other families with centronuclear myopathy that have previously eluded genetic diagnosis may turn out to be linked to this same gene. Researchers can now use this finding to better establish diagnosis and understand how these myopathies occur’.

The discovery of the Titin protein’s role in this condition is a great example of the power of international collaboration between leading neuromuscular research teams. This is really good news for our community

If you have been diagnosed with myotubular myopathy but have never had your MTM1 mutation identified of confirmed in a clinical laboratory, you may want to consider enrolling in the MTM Genetic Testing study.

For European patients, where the culprit gene has not been identified via genetic testing, retesting can be requested via a clinician, as most diagnostic laboratories in Europe are currently validating these novel sequencing technologies. In Europe, such a request for re-testing must be made via a clinician, rather than directly to a laboratory and testing is free in some countries.